History: Thomas’s Place and The Terrace

Thomas Place and The Terrace

Elsie Ousley's death in 1972 ended a 275 year association by her family with Pinneys,  the house on the site of  which Thomas's Place and The Terrace is built. Miss Ousley (as she is still known to this day among those Thorncombe natives who remember her) had a Great Uncle Thomas Ousley (1817-1896), a stone mason,  who built Thomas's Place, the Terrace and Hillside on the corner of Chard Street. His wife Maria was a milliner. The date stone on the gable overlooking Little Orchard records the building of Thomas's Place and the connecting wing of terraced houses (now numbers 4-7) in 1865. While a new kitchen was being installed in 2000 at number 4 in the former scullery at the back of the house, the remains of a small window was found in a cupboard on the party wall shared with number 3, the end of the original row. Look carefully along the front of The Terrace and you will see that Thomas, also left his mark in the stonework. There's a capital T for Thomas picked out in contrasting brickwork between each house, apart from numbers 3 to 5, which were built later after the 'Great Fire of Thorncombe’ in 1882. Hillside on the corner of Chard Street and High Street also bears Thomas's mark.

History does not relate whether Pinneys fell down or Thomas pulled it down although evidence of an earlier fire pre-dating the 1882 fire was found during renovations in the 1970s. A surviving buttress keyed into the rear of the house and part of an old chimney breast inside, suggest  that parts of Pinneys were incorporated into Thomas's and Maria's impressive new house. Thomas also left another mark on number 4. He appears to have built  the house at the end of the row specially for his unmarried sister Mary Ann Ousley, a grocer. This explains why the house is double fronted and  bigger than its neighbours. Mary Ann's shop was to the side of the front door  at the top of the path leading from High Street. The tall double windows could be opened to serve customers to save them coming into the house and the extra room above rented out for extra income along with the other spare bedroom.

Following 'The Great Fire of Thorncombe' in 1882 when  according to the Chard & Ilminster News nearly half the village was destroyed, it was reported that 'Five slate-roofed houses belonging to [Mr Ousley] ... were injured by fire and water'. Various tenants living next door to the Ousleys also had  their furniture damaged. Hillside, on the corner of Chard Street,  newly built by Thomas in 1882, escaped the fire.  Shading on the 1889 1:2500 OS map  (above) shows The Terrace still being rebuilt and extended seven years later. It clearly took Thomas Ousley some time to sort himself out as he wasn't insured for buildings or contents. Numbers, 2 and 3 also still have windows in their ground floor back rooms which proves that  the rest of The Terrace was built piece meal after the fire, presumably  as and when Thomas could afford it. Not only did he have to meet the cost of repairs out of his own pocket, his income from rentals was also affected, as other houses he also owned and rented out elsewhere in the village were burnt down. In order to raise funds, Thomas sold off part of Pinneys Tenement,  the small field behind The Terrace for £100 in 1885.

Thomas's wife Maria predeceased him by three years. There were no children. When Thomas died in 1896, his nephew leather cutter, Richard Read Ousley (abt 1851-1941) inherited Thomas's Place and The Terrace. In his will, Thomas specified that the heir to Pinneys Tenement' neither sell nor mortgage any of my real state so long as the Ousley family are living.' In 1923 Richard Read brought back the field behind The Terrace, which Thomas had sold in 1885 to raise funds. The 1923 auction  followed the death of Captain John Bragge in 1922, the last in his line, and ushered in the breakup of  the Sadborow Estate. Richard Read's purchase settled a debt of honour to his benefactor and ancestors by reinstating the land on which Pinneys Tenement had stood since 1623  and which had been in the ownership of his  family since Edith Hoare's marriage to Thomas Ousley in 1769. Lot 13, 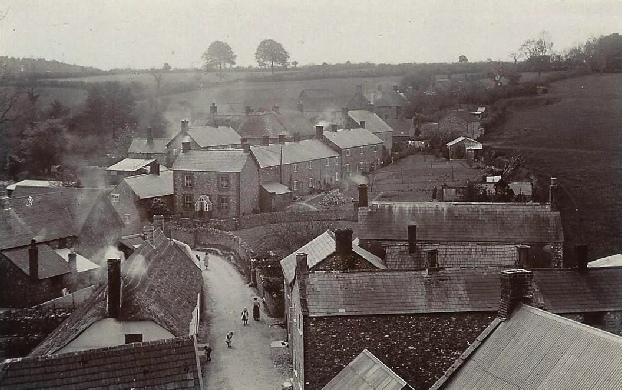 Rear view of The Terrace and Thomas's Place, and the rented 'piece of Garden Ground', circa 1914,

bought back from Sadborow at auction by Richard Read Ousley in 1923.

In 1941, the last of the Ousley line, Richard Read's only daughter, Elsie, inherited the property. Thomas's Place remained her home for the rest of her life and like several  of her female ancestors,  Pinneys Tenement provided Miss Ousley with financial security through rents from The Terrace. Following her death without issue in 1971, The Terrace was sold off in separate lots thus ending her family's 275 year association.

For a more detailed account and  detailed supporting references see:

An update on some of the Thorncombe evacuees

War-time evacuees Londoner Iris May Hall (left) and Mary West were taken in by Richard and Elise Ousley. Iris subsequently left school  at 14 for a job with London Transport. She went on to work as a secretary for UNESCO in Paris after the war, travelling on to Haiti and   Jamaica before returning to England in 1968. Her stay in Thorncombe left her with a lifelong love of the English countryside.

Iris died in 1985 and is survived by her three children.

Reproduced courtesy of the daughter of Iris Hall, Shelley Millingen.

Further below is a picture of Iris at about 17 years old, about the time she would have gone to Trafalgar Square to celebrate VE Day. 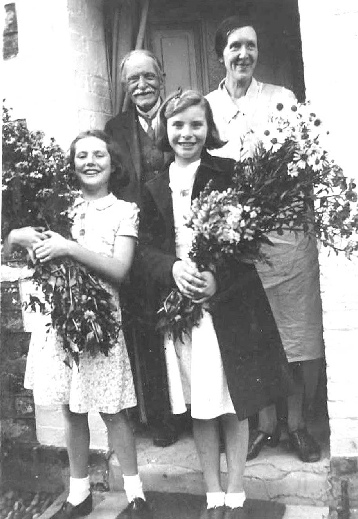 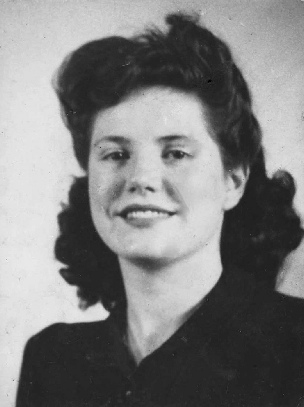