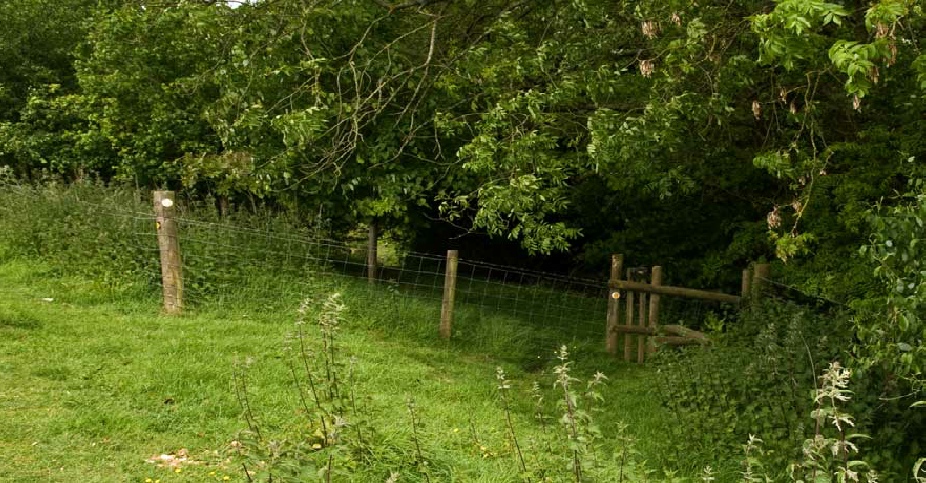 If you would like to read the original report on the meadow before the wood was planted, click here.

A group of interested locals, including 3 TVT Trustees, met at Johnson’s Wood to analyse ways of managing the woodland.

There were several ideas and suggestions from various quarters, including felling and clearing some of the trees . Our aim was to discuss the best strategy - best for the wood in the long term, the environment and the amenity value of this little area.

We were lucky to be able to have two experts on hand  - Martin  Drake, an entomologist, and Mike Lock, a botanist, both from  Axe Vale & District Conservation Society. We are grateful for their generosity  in giving up their time. Their different specialisms brought a breadth of expertise to the discussion, and helped us to define a plan as follows:

1. Bearing in mind that this is a very young woodland and that some trees will die in the not-too-distant future, (future risk of ash die-back and the naturally short life-span of cherries, as well as considerable squirrel damage to oaks being some examples), the advice was to resist felling. The point was strongly made in favour of preserving dead and dying trees in the woodland for insects.

2. It was agreed that to many walkers the wood is quickly passed as they walk along the path to the Dungeon. The single entrance via the stile (photo above) discourages tying the area into a longer walk., The existing footpath at the bottom of the field can be difficult in winter, so suggestions that were made included adding another bench and a picnic table to Derrick’s bench, making it a more inviting place to pause. Also, to try and negotiate another entrance further along the wood and nearer the village. This would mean that walkers could walk through , enjoying the field and the wood from below, as well as the view.

3. The field below the woodland is rapidly becoming taken over by enormous bramble patches and blackthorn. It was agreed that the central bramble patch should be cleared in autumn, including the elders growing through it, and that the blackthorn which is rapidly colonising the open field should be cut back. This last job has already been done by Richard and John W.

4. As the field is not grazed the grass is turning into scrub. We were advised to cut it and remove the cut grass to encourage flowers. By doing this clearing it was hoped that the field would resume its previous existence as a glade with wild flowers.

5. Planting smaller trees such as hazel at the edge of the wood was also advised - this would give cover to small mammals and birds and encourage a wider variety of species of insects and birds.

6. We should collect wild bluebell seeds and sow them while still fresh in July/August. Freshly turned soil from badgers would be good locations for this.

7. An on-going plant survey was suggested - this would help monitor the area. 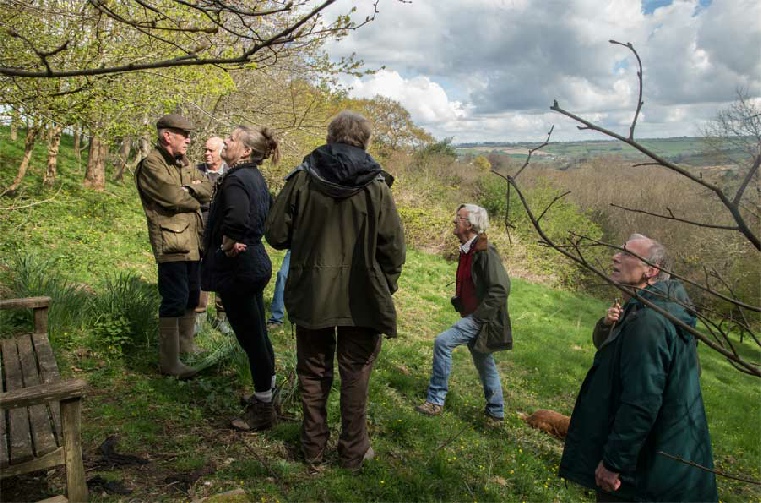 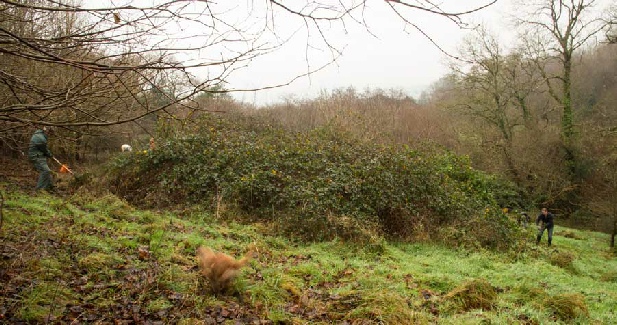 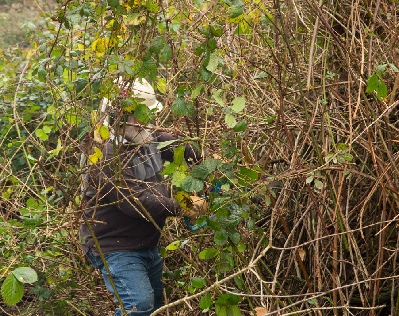 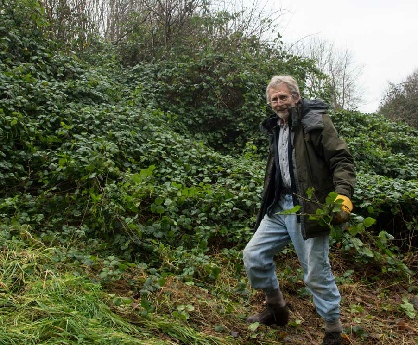 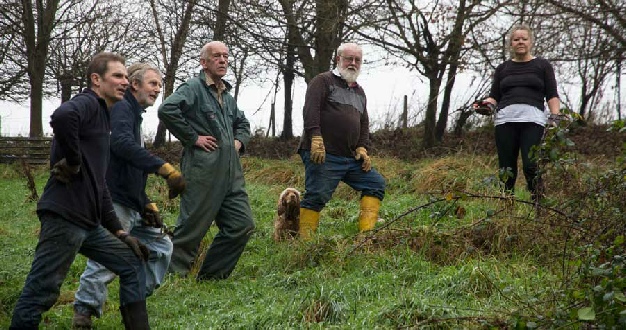 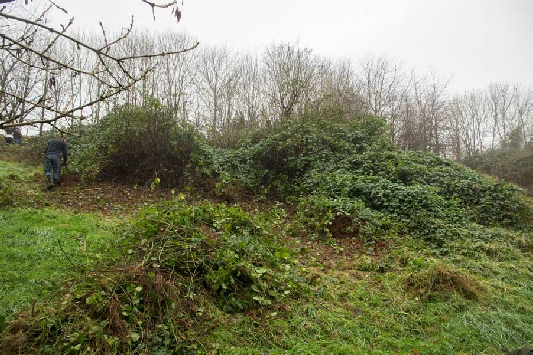 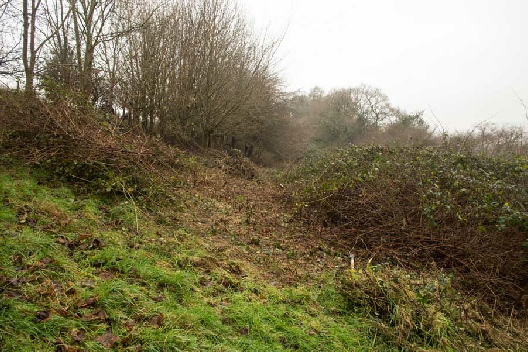 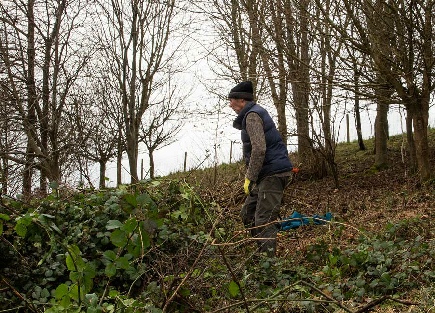 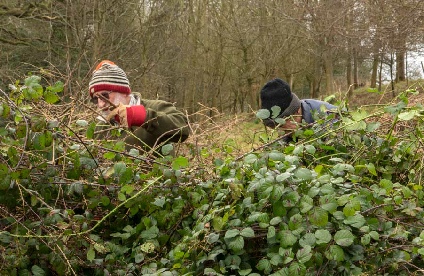 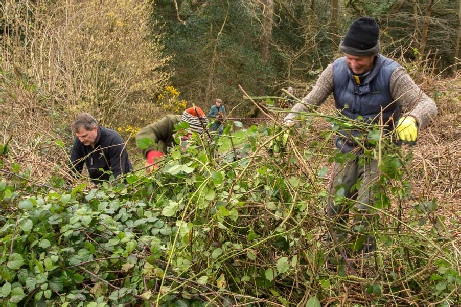 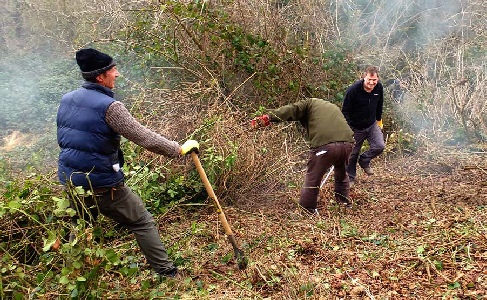 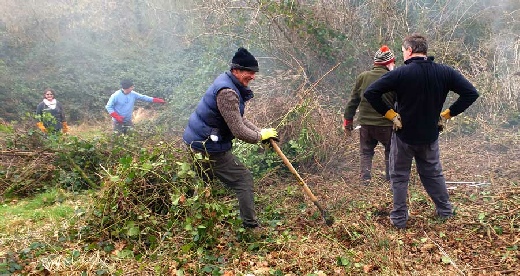 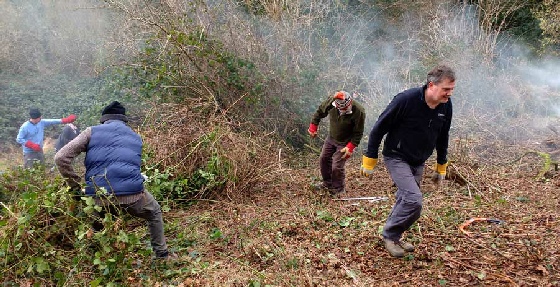 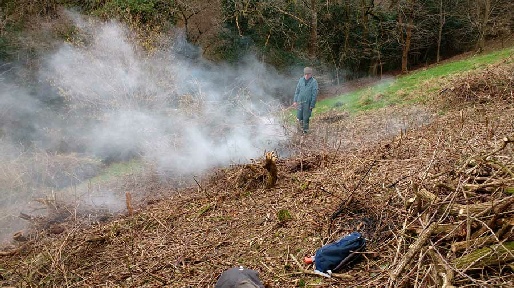 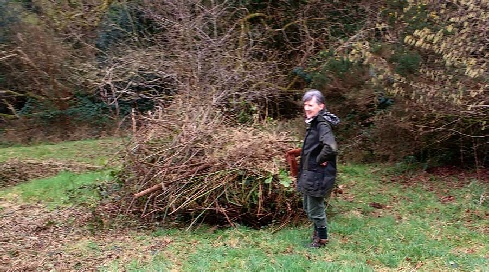 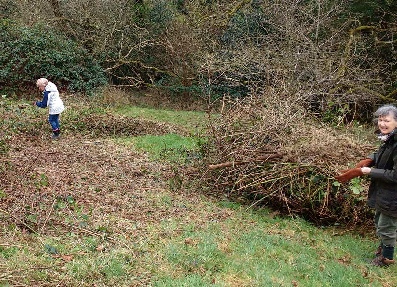 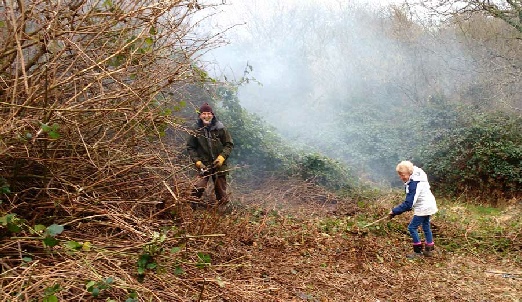 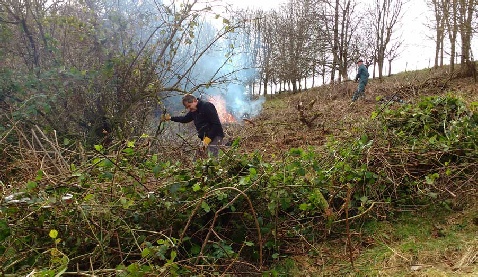 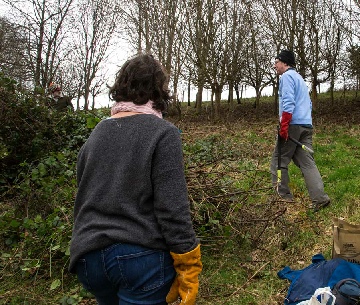 The enormous bramble patch as it was…..

In 1997 Mr Johnson, a local landowner, allowed the sloping site near Dungeon Coppice   to be planted with woodland trees by Thorncombe Village Trust. Many people pass this woodland daily when walking through from Wittey's Lane to the Dungeon without realising its history.

The steepness of the field made cultivation difficult, and we were looking for a suitable site for planting a large number of trees .  At that time Derrick Comley, one of the founding members of the Trust, was enthusiastically involved in tree-planting, and was instrumental in establishing the wood. His memorial bench is there for everyone to use and enjoy the peace while looking out over the valley.

Early plans and discussions took place in January 1997, and we were able to access a Forestry Authority Woodland Grant from Dorset County Council, who also sent along a Conservation Field Team to undertake planting at the end of 1997.

The site qualified as a Site of Nature Conservation Interest in Dorset, and Dorset Wildlife Trust gave us valuable advice on management of the site.

The Trust was responsible for the fencing and aftercare of the trees. 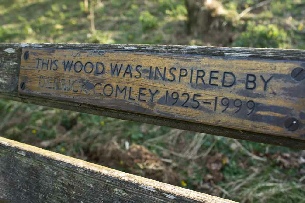 Following advice from the County Trees and Woodlands Officer, planting was restricted to the higher parts of the slope, leaving a glade lower down to continue providing a habitat for plants that had been identified, such as Black Knapweed, Devil’s Bit Scabious, Mouse Ear Hawkweed, Pignut, Louse Wort, Tormentil and Betony.

In the intervening years the trees have grown and filled out the space, creating a real woodland. A couple of years ago we asked advice from Dorset Wildlife Trust over the condition and maintenance of the wood, as most of the trees had now grown out of their protective sleeves, and some had died or fallen over. The advice given was to leave the wood to continue as it was for the present, and to leave the fallen trees and branches as valuable cover and habitats. We will continue to review this.

We have lopped some branches from selected trees to create a view through from the top path :

From the village, turn down Wittey's Lane from High Street and continue straight on, crossing the stile at the end of the lane, and going through a field. After passing through an open gateway you will see the wood on your left behind a fence. At the end of the wood turn left and just down on the left is a stile and a dog-gate. The bench is half-way up the slope. 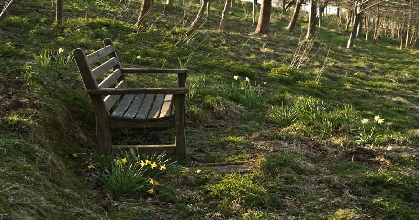 It is now 17 years since Johnson's Wood was created. We have seen it become a beautiful and valuable part of the landscape, and over future years we will watch as it develops.

If you haven't been there yet, take the time to visit and sit on Derrick's seat and enjoy  the view.

Following the advice detailed above, a small group of local volunteers got together to tackle the brambles one Saturday  morning.

We made quite a dent in the mountain as can be seen from the photos, but more needs to be done, and it has to be done before the birds start nesting….so please contact us if you can help.

Thanks for all the help on Saturday 25th Feb - lots cleared and burned. It’s amazing what can be achieved with a willing group!