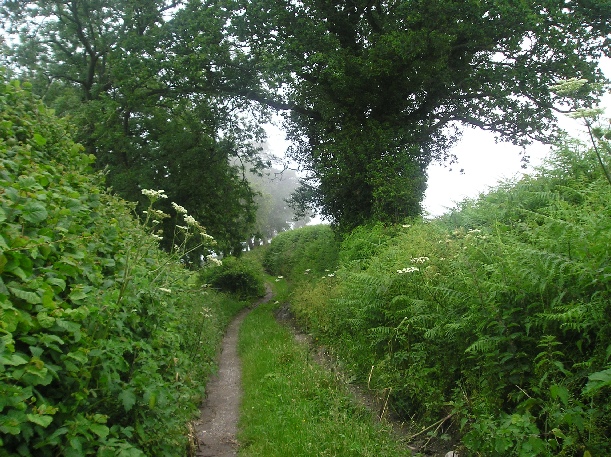 Papan [now the Old Granary] was one of two  former village bakeries. It was  in use until 1968, when it was sold. Richard and Pauline Holt lived there from 1972 until 2006. The last baker, Mr Saunders, built the village shop next door on the site of some outbuildings around the same time that he sold the bakery. Next  door was a forge. There was another forge next door to Thomas’s Place on  High Street, formerly Chard Street, where there was another baker further down the hill on the right hand side opposite the vicarage. Traditionally the forge on Chard Street worked for Forde Abbey and the forge on High Street worked for Sadborow.   Mr Down, who lived next door in The Old Forge, was a fund of knowledge on the history of the village. In the 19th century the Forge, the Bakery and Church Cottages were all owned by  his ancestors. These properties were gradually split up between the children of each generation, which explains why the garden of the Forge illogically cannot be seen at all from the house. It extended  behind other houses over to Wellstone House where  the church   school used to be.

Chard Street , circa 1935,  showing  the forge and the bakery on the left.

The house has been rearranged many, many times in its history. As we found it, the front room was the ‘shop’ with a channel in the stone floor still to show where the counter had been.  Basically the house consisted of one room wide stretching back from the street. Two thick internal walls divide the house into three subdivisions, and I believe at some time there was only one door between the front two sections on the ground floor and two staircases. If you wanted to get to the back bedroom from the front bedroom you had to come down one flight of stairs, go through the door between shop and living/kitchen and up the back stairs.

When Pauline and I moved in, there was a door upstairs into a bathroom in the rear section, but that only occupied a very small portion of the flour loft over the bakery. Again, to get into the bakery, one had to go outside and in through the next door. The loft itself was reached through a trap door just inside the bakery door. Rungs to climb up were set in the wall.

The oven was enormous, about nine feet square, with an imposing front with several cast iron doors. The firing door was tucked up against the far wall and angled in towards the centre of the oven so that it was difficult to see unless you went right over to it. The centre of the oven front was dominated by the main door, about 20 inches broad by 15 inches high and arched at the top. Below this was a proving cupboard, with double steel doors and lined with racks for baking trays. There was a small hatch over the main door to catch the soot that might fall down the chimney and stop it going back inside the oven. Finally there was a pyrometer or temperature gauge, which worked by means of a long steel rod inside a tube inserted in the oven. As the temperature rose, the rod expanded; this movement worked a dial on the face of the gauge.

We were lucky enough to get to know Mr and Mrs Chubb who were in the bakery before Mr Saunders and through the war years. Mr Chubb told me a lot about the bakery and his methods. In his day they fired the oven with faggots of wood, and gauged the temperature by the colour of the oven roof: black, too cold; white, too hot; black halfway, just right. The hooks in the roof beam over the front of the oven held the peels - long wooden paddles called ‘peels’ for lifting out the bread, cakes and pies.

Machinery, such as dough mixers, and also the sinks and general storage were mainly outside in the shed which wrapped around the side and rear of the premises. Flour and other supplies were stored in the loft over the oven, which presumably kept them warm and dry. There was no access to either the bakery or the flour loft from the house itself while it was in use – it was necessary to go outside, and back in through the bakery door (now our back door). Although baking stopped some five years before we moved in, there were still plenty of little mites that fed off the flour and other dust when we arrived. These seemed to be harmless and gradually disappeared over time.

Before we came to renovate the rear of the bakery, we changed the shed into a garage. I got into deep water because there was a thick sort of buttress wall, about chest high, at the rear of the oven inside the shed. This was of rough stonework, but was not keyed into the rest of the wall, and appeared to be there only to retain the heat. I needed to pull it down to make more room for the car, but when I did so, I uncovered rows of bricks down near the floor, stepped out in regular rows. These were also in the way so I whacked away at one till it disappeared. Getting down on my hands and knees, and applying my eye to the hole, I found I could see the door of the oven! The domed roof of the oven was actually built into the rear wall, rather than up against it. I had been chiseling away under maybe forty tons of masonry. As I looked I could see little falls of dust as it creaked over me. I quickly hammered in a wooden wedge and zipped off to Crewkerne to hire a cement mixer. The wall held, and I then dug down through the sand over the roof and broke into the oven to shore up the wall from the inside. The rubble from the oven filled about ten farm trailers. The front we intended to keep as a dividing wall, but sadly, the brickwork was only one brick thick at the front. when the stonework behind was removed, the front collapsed. I still have the fittings from the front of the oven, however. 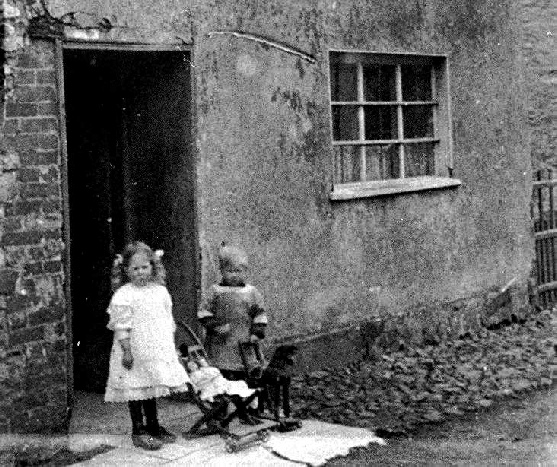 Sonny’  Down and his sister May, outside the forge, Chard Street

At one time the bakery and the forge next door were owned by the same family. Two sisters, Elizabeth and Sarah Shoud, inherited properties from their father, John Shoud, who occupied one or both properties from May 1784. Elizabeth married William Chick, a tailor, and Sarah married  blacksmith Robert Gibbs. In 1846 they mortgaged the properties for £50. Mr Down’s grandfather and uncle were both Gibbs and were the last blacksmiths. Until Alfred (Sunny) Down’s death in 2003, The Old Forge on Chard Street had been occupied by the same family for five generations including Alfred Down's uncle, Alfred Gibbs,  who Tom Gibbs’s son, and Tom's father, Robert Gibbs. These three members of the Gibbs family were all blacksmiths. The Gibbs family came from Crewkerne in the early 19th century. The Old Forge was conveyed together with Papan [The Old Granary] in 1784 and has hardly changed

In the early part of the 20th century there were two busy forges in the viIlage. All that survives of Little Orchard Forge on High Street is part of the fireplace and its cobbled floor. That forge originally belonged to the Sadborow estate. Mr Bonfield who was Wilfred Potter's grandfather rented the forge and later bought it. Sadborow work went to Little Orchard, and Forde Abbey work to the forge on Chard Street.

Alfred Gibbs often walked from his smithy in  Chard Street to Forde with his tools for shoeing. He was born in the late 1860's and died during the early 1930's. Behind the heavy studded double doors there were two forges. Each was worked by a blacksmith and mate. Work included shoeing horses, mending farm machinery and making domestic ironwork. When the weathervane was transferred from the oId church, the forge made the new stays. It also made the large candle-holders which later held oil lamps, before they were replaced with electric fittings.

Mr Down recalled holding the work while his uncle fitted new blades to farm mowing machines, and the hiss of steam when hot iron wheel rims were cooled tight onto the wooden wheels. His uncle drank lots of cold milkless tea during the hot work. When the iron frame of the old church clock was taken down, Alfred Gibbs wanted to buy it from Canon Bragge to put a grinding wheel into it. He had to wait until Canon Bragge died. The Old Forge garden was fertilized by iron shavings and raspings from horses’ hooves.

After Alfred Gibbs died, Reg Hallett from Wambook rented the Chard Street forge. It closed in 1938, as war clouds gathered and working horses gave way to tractors. A photograph shows the blacksmiths seated with refreshment at a table set up by the Royal Oak’s coach house. The window to the left of the front door of The Old Forge is set into the entrance, a double doorway big enough to allow in a horse for shoeing.

Based on  articles first published in TVT News, June 1990, April 1991 and winter 1998. Reproduced by kind permission.