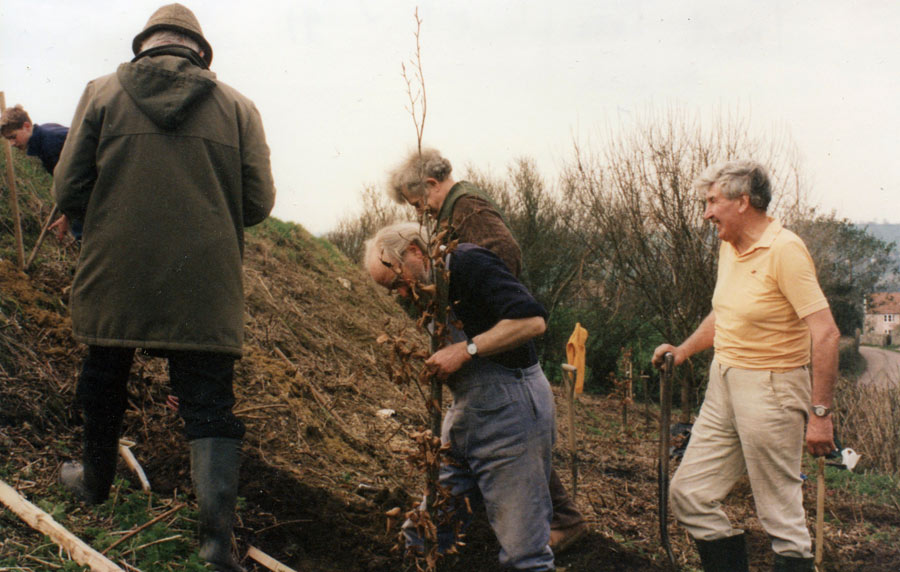 It was written by the late Terry Freeman, long -serving Trust committee member and Treasurer.

The morning of Sunday, 17 October dawned crisp and sunny with a stiffish breeze which was intended to ensure continuous movement for fear of icing up.

As the church clock struck 2.30 p.m. a band of 17 people plus two very large dogs were silenced as the order "Forward” attacked the eardrums. Thus another

Village Walk was underway, the route plotted and walked by the late Derrick Comley together with John and Vivienne Daiziel.

The 'crocodile' moved off towards the school but was soon confronted by a large gate and stile where there was evidence of lack of prior training epitomised by the cracking knee joints. We coursed across this field around the back of Tansee and over the stile adjacent to "Foxleigh" arriving at Fore Street and then on to Stonelake Brook – subsequently invading the privacy of Gough’s Barton whilst admiring the brilliant red foliage of a rampant vine.

Yet another stile was crossed and our leader pointed vaguely into the distance, which indicated we were to pass along Sunnyside Farm, following the Wessex Ridgeway and up a steep climb to Blacknorth Plantation, sometimes referred to as Bluebell Wood. This element of the walk was quite steep which gave vent to various grunts and sharp intakes of breath by the participants. The dogs ambled along totally unfazed and gave athletic displays by clearing stiles and gates at one bound.

The rest of us carried on doggedly. (Sorry about that one!)

Sadborow Road was reached and thoughts of returning home predominated the participants' minds. However our leader once again marshalled the troops and we continued on the Wessex Ridgeway through Grighay Farm, Gashay Farm and along Gashay Lane to Sadborow Mill. Here we turned left into Sadborow Estate and up the hill towards Sadborow House and thence onto Sadborow Farm and the Plantation. On this part of the walk the odd hurdle was noticed following a recent equestrian event, however, there were no takers on the offer of a quick leap into the future. The Keep Fit addicts felt it was not good form to show off.

A loud exclamation of relief was heard as we passed Schoolhouse Farm and another road was found. Again our leader's command rang out 'Forward’  across the road, following a track over the field of the Sports Club. One final stile was climbed then a gate and finally we hit Chard Street.

Here we were directed left to eventually arrive at 1 Tansee and following an intense pollution of the local atmosphere due to the removal of "pongy”  footwear, fell upon a sumptuous repast provided by Vivienne and her helpers. The luxury of a comfortable seat was nearly too much; however the crocodile "homeward plodded its weary way" conscious that the estimated distance of 5 miles could have been somewhere between 5 and 7 miles/

An achievement by all who took part, particularly Pam, who inadvertently attempted a rapid descent of her stairs at home, which left one arm immobilised,  but nevertheless scaled the hazards of the walk with the rest of us.

Our thanks to Derrick, who would have laughed his socks off at how he had tested the determination of the Village Walkers, also for the enjoyment of many prior excursions over the years which enhanced the appreciation of participants of the beauty surrounding Thorncombe Parish

Planting trees at Stony Knapps, Terry Freeman on the right.

Derrick centre foreground, Roger Montague behind him, and the back of Peter Moreland on the left, with Chris Holt just visible on extreme left.