Gough’s Barton stands in a particularly favoured situation in Thorncombe, comparatively sheltered, and conveniently near the village, yet very peaceful. To the north it enjoys superb views of  the ridge at Windwhistle and the Synderford valley, while the sunny south side of the sloping pasture (formerly known as Rank of Trees Close) abounds with wildlife. ‘Two or three cottages knocked into one …’ is typical of the verdicts given by sages among those passing the house as they follow the now popular walk to and from Birdsmoorgate via the Synderford valley. The sages are mistaken. In fact the building probably dates from the first half of the 17th century and is one of the older surviving houses in Thorncombe. Among those that have not survived must be many ‘cottages’ which during that period, were very elementary shelters with one room upstairs and the other at ground level, probably shared with such domestic animals as poultry, dogs, pigs and goats. As the walls consisted mainly of cob, the life of these buildings depended upon the careful maintenance of their thatched roofs, as otherwise rain and frost literally destroyed the cob walls. Indeed there is little doubt that this must have been the fate of two nearby dwelling which, in 1841 were still occupied but have now almost completely disappeared.

Gough’s Barton could easily have followed suit as the outside walls were built from cob, an unbaked earth mixture used to build the bulk of west country dwellings and farm buildings until the 19th century. The original builders did not seem too particular about a limited amount of foreign matter being mixed with the earth. During the course of our repairs to an outside wall at Gough’s Barton two deeply buried pieces of broken pottery were discovered. These were sent on a time-consuming identification round of museums in Chard, Taunton – and eventually- Dorchester.

There an expert finally attributed one piece to a local pottery, possible Donyatt and 18th century. The other - which is of an unusual green – was proclaimed to be copper-glazed earthenware from Spain, of the 16th or 17th century. It was also thought to be part of a barber’s dish, barbers at that time being not only haircutters but also elementary surgeons.  One may well ask how a Spanish dish came to be in rural Thorncombe. The probability is that it was imported via Lyme Regis, at that time an important little port for trade with Europe. Such finds are used by museum staff to add to local historical knowledge of trade patterns etc. Our green shard is in that category.

Although much altered, Gough’s Barton has a number of features which clearly identify it as a small longhouse with a cross-passage, the area on the west side being for livestock while on the east side was a doorway to the human accommodation. This consisted of a living room, with a large fireplace for heating and cooking, connected to small ‘service’ room [in which other household tasks were carried out, usually by servants. EH]. Upstairs was the sleeping accommodation, possibly without partitions in its early years.

Long houses are very much a west country feature and there are other examples in the parish which, like Gough’s Barton, built on sloping ground to assist drainage, the livestock quarters being at the lower end for obvious reasons! When the house was extensively renovated in 1974/75, the discovery of rot meant that a quantity of remaining old detail had to be replaced, viz windows, doors, staircase, some floor joists and boards. Also the main brick chimney stack had to be dismantled to first floor level as the upper parts had become unstable. The general layout of the ground floor rooms nevertheless remains unchanged. Following the country survey of 1983 by historic buildings inspectors, Gough’s Barton was listed Grade II.

Photographs taken in 1974 show the house as it had been for the previous 40-50 years (during which the thatch was capped with corrugated iron and the walls rendered) with a gap separating the original building from the flint-walled barn at the east end. This had formerly been a direct extension of the house, the gap being created by the occupiers to stop the house being invaded by rats via the common thatched roof. It was decided both to close the gap and to restore the common roof during the renovation of 1975 when the barn was also converted to living 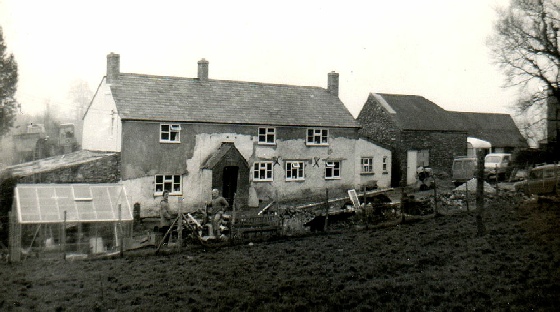 Interesting surviving features indoors include two deep-chamfered ceiling beams downstairs and a wall-plate between the living room and ‘service’ room, which Robert Machin, the Dorset historian, identified as the former top-rail of a muntin and batten partition. Another relic is a multi-perforated joist incorporated in one wall of the inglenook fireplace, the corner post of a timber fire hood, according to Mr Machin.  Although conjecture, it seems possible that modernisation of the property around 1800 may have included replacement of the timber fire hood with a brick-built fireplace and flue, conversion of the east end of the house to living accommodation, closure of the cross-passage and provision of the existing porch, plus construction of fresh livestock accommodation in the form of the barn at the east end. Certainly the bricks used in each location are remarkably similar.

Researching Thorncombe’s past is hampered by several factors. Until 1844 the parish was in Devon. Hence some records are still in Exeter, while others are in Dorchester.  Various parish records were destroyed in a vestry fire in the 19th century and where ownership by the Bragg(e) estate is involved, deeds etc are often incomplete.

So far as the Gough family is concerned ( also spelt Goff, Gouff and Goffe as befitted the time) the earliest record traced goes back to 1627 when Joseph Gough was a witness to a property transaction involving the Bragge family. During the next 100 years various marriages, baptisms and deaths are recorded in the parish registers, the last being the demise of Mary Goffe, a widow, in 1728. Although surmise, it  would seem reasonable to assume from the available evidence that the house was built for the Gough family in the first half of the 17th century.

[A John Gough is listed in the surviving 1660 poll tax return for Thorncombe. Alas the document is damaged and the amount for which he was liable is not legible. Given only those in receipt of poor relief were exempt, this tells us he was solvent but provides no indication of his social status or whether he was a freeholder, lease or copy holder or tenant. Anybody over 16 was liable to pay the 1660 poll tax. The amount levied depended on social rank, professional status such as an attorney, or income. While the timber fire hood referred to above may date back to the 17th century, there is no entry for a Gough in the 1674 Hearth Tax return among householders or paupers, but the return is also incomplete due to damage, so the omission may not be significant, or the house may not have had a fireplace, just an open hearth and a hole in the roof to enable the smoke to escape. EH]

‘Barton’ is a term much used in the names of west country farms and in old English meant ‘a barley enclosure’ or ‘an enclosure where husbandry is done’. In the tithe map apportionment of 1841, ‘the enclosure’ amounted to about 10 acres and seems to have been unchanged when the property changed hands in 1923, consisting of a large garden, an orchard, one arable and one pasture field, all to the south of the house and still clearly identifiable.  Nothing so far has been traced of who followed the Goughs until the tithe records, which show Robert Farrant as the owner and Thomas Langford as the occupier. Some time before 1923 the property became part of the Bragge estate, Mrs Bragge eventually selling the Barton in that year by auction together with other properties in Thorncombe and Marshwood to raise funds to pay death duties.

The auction was at the George Hotel in Chard on 15 March1923 and Gough’s Barton was sold for £340 to a Mr Johns, although Mrs and Mrs Thomas Sperring from Bristol became the new owners. Previously the land had been let to Mr Miller of Workhouse (Higher) Farm while the house etc was occupied by the Stuckey family. Mr Stuckey continued to rent what is now the garage as a carpenter’s shop for some years after the Sperrings had come.

Tom Sperring was a hardworking and resourceful man who made a number of improvements to the house, including the installation of a cooking range and hot water system to replace the inglenook fire: a bathroom and WC were created on the ground floor and remained functional until 1974. Like their successors the Sperring supplemented their income by taking paying guests and by means of a paper round on Sundays using a motorcycle and sidecar. Mrs Sperring died in 1996 ages 96 years. Her children, John and Rachel, still live in the area.

In 1956, the Barton was sold to Mr and Mrs R W Warren who had been farming at Glebe Cottage for some years. Gough’s Barton was re-named Sunnyside Farm. The Warrens kept eight cows to supply a local milk round, Mr Warren delivering on foot with a yoke on his shoulders. As possibly  the last person to do so in the UK, he was the subject of a short article in The Guardian in July 1962. The photographs show him outside Gough’s Barton. Note the front boundary wall, since demolished, and the stone front wall. The person at the gate is Miss Lillian Warren, his sister. The old garden to the south of the house was still very much in use. Mrs Warren planted the fine walnut tree which still stands in the remains of the garden enclosure. Both Mr and Mrs Warren died some years ago, but their son, Brian Warren, still lives in the parish.

In 1967, the Barton was again sold and by then the holding had increased to 25 acres. Although mains electricity had been installed, water still came from a nearby spring. The property was bought by Mr and Mrs Score who extended the acreage to 32 and enlarged and modernised the milking arrangements and accommodation for their dairy herd. They wanted to demolish what had become a damp and uncomfortable house and replace it with a modern bungalow but before these plans could be realised, Mr Score sadly died.

In 1973 the Barton was auctioned and sold this time to Mr L C Harris of Holditch who wanted the land to extend his old holding. The house with one acre of ground was subsequently re-sold in 1974 to the present occupiers Mrs and Mrs P Moreland who restored the old name of Gough’s Barton, carried out major restorations and created the existing garden.

This article combines two articles which were first published in the TVT Magazine in 1996. They are reproduced by kind permission of Mrs Sheila Moreland, who also provided the photographs from her archives.