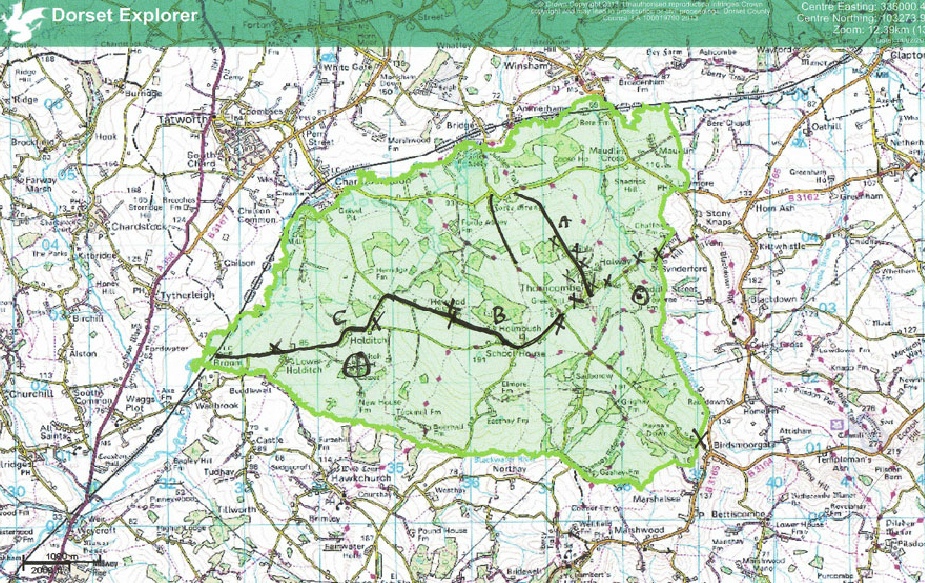 Today, Thorncombe is a Dorset parish, lying in the corner where Dorset, Devon and Somerset meet. Bordered on the south and west by the Devon parishes of Hawkchurch, and for a short distance, Chardstock, to the north by the Somerset parishes of Tatworth and Forton and Winsham, and to the east and south by the Dorset parishes of Broadwindsor and Marshwood, it is part of the area administered by West Dorset District Council. The civil parish is divided ecclesiastically, with the main part in the Two Shires Benefice in the diocese of Bath and Wells, and a smaller area in the south in the Golden Cap team ministry in the Diocese of Salisbury. In Parliamentary elections the residents vote in the West Dorset constituency. 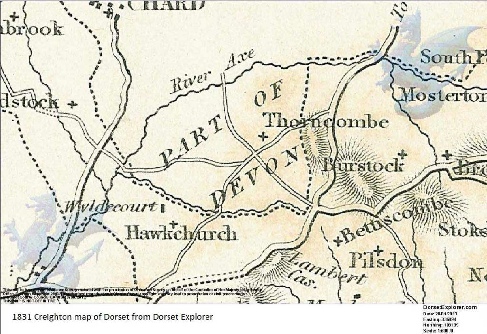 Prior to 1832, practically nothing in the preceding paragraph would have been correct. As the 1831 Creighton map above shows, Thorncombe at this time was a Devon parish, an enclave, part of an isolated part of Devon separated from the main part of Devon by the Dorset parishes of Hawkchurch and Chardstock. The parish also contained a detached part of Axminster parish, the tithing of Beerhall and Easthay, lying between Thorncombe and Hawkchurch and  was part of Axminster Hundred. The ecclesiastical parishes  of Thorncombe and Hawkchurch were part of the diocese of Exeter. In Parliamentary elections the few residents entitled to vote would elect one of the two Knights of the Shire for Devon.

The process of Thorncombe’s incorporation into Dorset began with the Great Reform Act of 1832. It made changes to parliamentary constituencies and the voting system. Thorncombe Parish and part of Axminster Parish “namely Burhall Downs [Beerhall] and Easthay” were transferred from the Devon to the Dorset electoral district. Stockland parish and Dalwood Township were transferred from the Dorset to the Devon electoral district. Changes to the Parliamentary Boundaries in 1832 were quickly echoed by a change to the Ecclesiastical boundaries for these parishes. An Order in Council of the 5th October 1836 transferred Thorncombe Parish from the Diocese of Exeter to the Diocese of Salisbury. In 1844  The Counties (Detached Parts) Act was passed  which  ‘annexed detached parts of Counties to the Counties in which they are situate’. As a result, Thorncombe and the detached part of Axminster both became part of Uggscombe Hundred.

Other changes to Thorncombe’s boundaries took place in 1966. The Hancock Commission was set up under the 1958 Local Government Act. Among proposals considered was the transfer to Dorset of the ‘part of the Chard parish of Wayford south of the River Axe’ and the transfer to Somerset of ‘that part of Thorncombe lying between the former and present line of the River Axe’. Somerset suggested instead the transfer of a larger area of Thorncombe including an industrial area known as ‘Yonder Hill’ just to the south of the River Axe close to Chard Junction. This suggestion was accepted by the Commission, and the suggestion was adopted. The proposal came into effect on 1st April 1966, establishing Thorncombe’s current parish boundaries.

This is an edited and abridged version made by Eve Higgs  in  April 2013, of a booklet on Thorncombe boundaries, 'Thorncombe - A Tale of Three Counties' by J W Hart by kind permission of the author. The booklet includes a detailed explanation of the boundary changes from 1832 onwards with maps relating to Thorncombe, the county boundaries and the surrounding parishes. A printable  version  of the whole booklet in A5 PDF  format is available here.