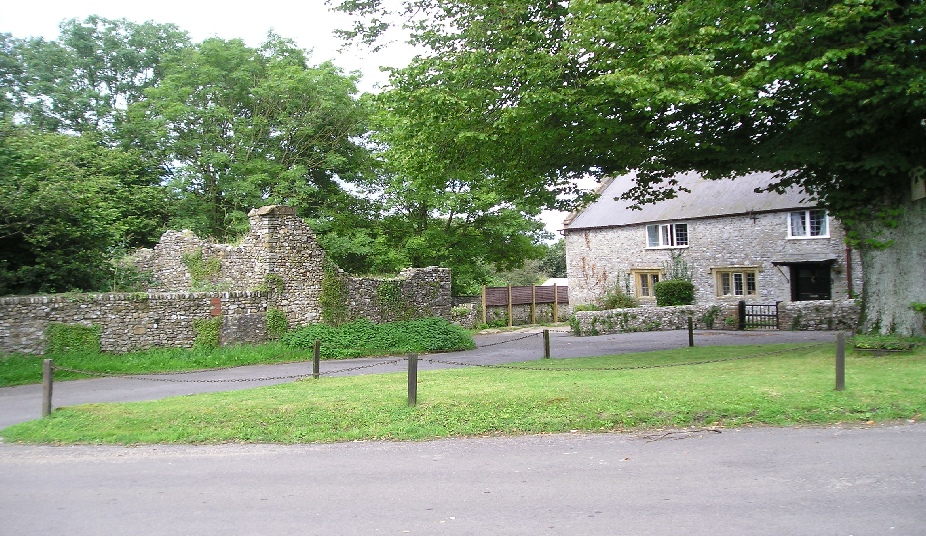 This walk begins at the ruined chapel of ease. A listed monument it was dedicated to the Cornish St Mellor in 1417.  Chapels of ease were built for the convenience of manorial families and their servants, living a distance from their parish church. After a short walk along the road to Yawlings  you will follow footpaths to Holditch Court. Some of the building dates back to the 16th century. Another listed monument, it is thought to be the gatehouse of Holditch Manor. You return to your starting point via Lower Holditch.

3. You have now reached Holditch Court. (Brief History of Thorncombe) Follow the path in front of the house and turn right on to Holditch Court Lane.  The ivy covered tower behind the house is part of the remains of Holditch Manor. A listed monument, described by Pevsner as ‘without parallel in Dorset’. If you want to take a  closer look at the tower, take the fork to the left of the lane, which is also a footpath leading to New House Farm. The tower is a rare survival of domestic fortifications dating back to the late 14th or 15th century. While it implies that  the manor’s inhabitants needed protect themselves and their property from marauders,  it might be an affectation. Fortification of domestic and ecclesiastical buildings during this period were subject to an application for a Crenellation Licence from the King and were a way of demonstrating social superiority. Brass memorials depicting the manor’s former inhabitants Sir Thomas Brook (died 1419) and his wife Joan (died 1437) are preserved in the parish church in Thorncombe village. In 1387 Sir Thomas, who was very rich and had extensive landholdings,  applied for a licence ‘to strengthen with a wall of stone and lime his mansion house… of Holdich and [to] enclose and mark a park of 200 acres of pasture and wood belonging to the manor and hold the premises including a deer-leap in the park to him his heirs for ever’.

4. Retrace your steps and continue up Holditch Court Lane. Follow the lane until you reach the footpath sign on your left. Pass through the open gateway and follow the footpath across the field to the stile in the opposite hedge.

5. Having crossed the stile follow the footpath keeping the hedge to your right. Where the hedge veers to the right, keep straight until you reach the stile. Cogan’s Farm is ahead.  Cross the stile and follow the path which takes your round the left hand side of the house. As you walk along the front of the house, you will notice wooden seat dedicated to the memory of John Gordon (1925-2006), former Chairman of Thorncombe Village Trust. Rest here a while if you need to.

6. Pass through the five bar gate and follow the track to the T-junction. You are now in Lower Holditch. Almost immediately to your right is a stile. Enter the field and follow the footpath diagonally left to the gate. Continue diagonally across the next field to the metal gate.

7. Turn right on to Holditch Lane, when you reach the sign to Holditch Court Lane turn right. Continue along it until you reach a stile on your left. Bear right across the field to the stile ahead. Cross the stile, turn left and follow the hedge, until your reach the double stile.

8.  Head for the silo. Turn left and you are back where you started.

To print out a copy of the walk :

1. Click on the pdf link below. 2. When the document loads up print it out