As part of his research for Magna Brittania , published in 1822, Samuel Lysons sent out questionnaires to parishes the length and breadth of the land. Thorncombe’s entry is in Volume VI, covering Devon 1 .  The parish became part of Dorset in 1844 following parliamentary boundary changes.  The following  letter from Charles  Egerton, Vicar of Thorncombe dated 11 January 1821, was recently found  among  Lysons Notebooks in the British Library 2 . Egerton  is writing in reply to  a further  inquiry from Lysons describes Thorncombe’s  defunct Saturday market.

‘ I have delayed answering your letter of the 31st in [hope]  of finding somebody who could recollect the exact period at which the Market House at Thorncombe was pulled down but what is very extraordinary that  [sic] I find many who perfectly remember it, none can at all recollect the time of its removal. They account for their large [forgetfulness] upon this point by saying that after a gradual [declination] of the market, it entirely stopped for some time & then again was revived for a short time, & again ceasing the buildings were at last pulled down. They state that there was a very pretty market place for grain and meat, & had [some] little shops [permanent stalls] for other wants, & that it was enclosed with a wall and folding  gates – that it  stood on the north side of the road a little away from it at the higher extremity of the village and that now forms part of a larger field called Pinneys Close. From putting together the various information I have received I am induced to [infer] that the date of its destruction was about 50 years ago, since which time there has not been even a nominal market day.’

Cross referencing Egerton’s  description  with the 1840 Tithe Map 3 and the 1838 apportionment 4,  locates the market house  as standing  on  the site of  ‘Great Pinney’s Close’ on which 1-4 The Terrace now stands, on High Street. The road is also wider at this point which suggests that  there were  probably also temporary stalls from the market hall entrance,  going up the hill towards Greenhill. 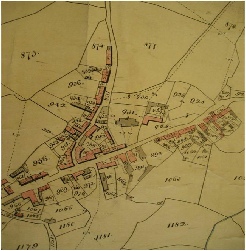 showing the centre of Thorncombe village. Plot 956 is the site of the 18th century weekly market.

Despite Thorncombe’s market charter dating back to 1313 5, the earliest  documentary  evidence of  regular  weekly  markets being held in Thorncombe discovered to date,  is another questionnaire  dated 1767. It was completed by Thorncombe’s Reverend Samuel  Hood  for Jeremiah Milles,  the Dean of Exeter who investigated  Devon’s agriculture. The results were never published but a rather poor quality  microfiche of the manuscript  held in the Bodlieian can be examined in the West Country Studies Library 6. Pulman apparently got his information about Thorncombe  from antiquarians  such as Risdon  and Polwhele 7,8,9. In his 1854  Book of the Axe  he dates the closure of Thorncombe market as 1773 ‘or thereabouts’,  which he probably lifted from Lysons’s notebooks who in his turn drew from Exeter antiquarian William Chapple’s  unpublished notebooks, now apparently lost.

Two factors, turnpiking and cattle disease  have been  identified as being  instrumental in the market’s eventual closure. In 1770  or thereabouts,  the coach road to Thorncombe  from Hawkchurch Common  to Venn,  via Easthay, Schoolhouse and the High Street was turnpiked  by the Lyme Regis Trust together with the  road to Crewkerne  through Birdsmoorgate  and a toll house was  installed  at Thorncombe Thorn 10,11.  Passersby today may spot the slightly lower window facing Horseshoe Road. This is where the toll house keeper sat to collect the tolls.

By now the main road linking Axminster and Chard and onwards to Crewkerne were also turnpiked  by the Yeovil Trust, ring fencing the Synderford Valley.  Each trust charged for the use of  their improved roads.  The network of footpaths and tracks surrounding Thorncombe and diverging in the vicinity of High Street/Chard Street enabled local traders and punters to avoid Thorncombe’s toll house.  But those from further afield had to pay up to two tolls in order to visit the market which made Thorncombe’s Saturday market an expensive day out. Traders and punters alike must  have  eventually simply stopped coming and taken  their custom to neighbouring markets in Axminster, Crewkerne and Chard, undermining the market’s viability.

Added to which, during the second half of the eighteenth century, several outbreaks of  cattle disease resulted  in  national restrictions on cattle movements 12. This may account for  older Thorncombe residents recalling  in 1821, that the market closed down then starting up again. An act of parliament,  passed in 1772  ‘to prevent the further spreading of contagious Disorder in horned cattle’  probably tolled Thorncombe market’s final death knell around  1773.